There are quite a few shops in the centre of the village worth browsing, alternatively the sister "mill" to Botany Bay called Bygone Times is located across the road from the Brown Cow pub.

Construction started on the new hall in 1548 and it is one of the finest examples of Tudor architecture in Northern England. A modern conference centre masks the hall which is haunted by a White Lady.

I was a simple Catholic woman. I was at this hall during the Civil War and times were hard. However bad things got I never thought I would be betrayed by a priest. I was taught you could trust a man of the cloth. How wrong people were.

An army of Roundheads came to the house. They found the priest hiding here. He was such a coward. He offered to hang me himself to prove he was one of them and gain his freedom. The commander kept him to his offer and the priest hung me from a beam which can still be seen at the hall. My only consolation was that the commander did not believe the priest and had him executed anyway.

I still visit the hall; my favourite place is the Scarlet Room. 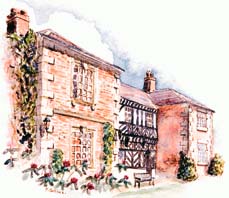 Mawdesley Hall stands in a commanding position on a sandstone outcrop. The black and white timber framed building dates back to the early 17th century when William Mawdesley lived there. The central hall is Tudor where there are initials of the Mawdesley family, RM 1625 and RM 1640; some of the inner walls are made from wattle and daub.